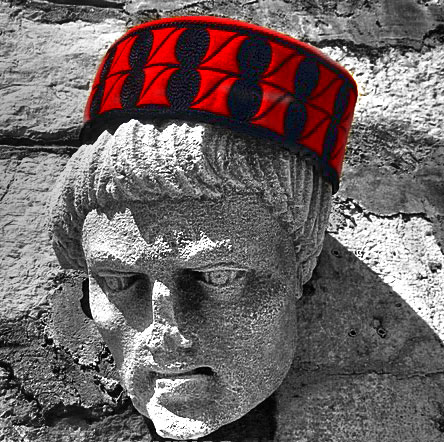 All nations try to preserve their antiquity. This represents a fortun for the future.

The city of Šibenik is one of the oldest native Croatian cities, often called the city of Krešimir because it was initially mentioned under the subject name in the charter of the king Petar Krešimir IV: The hat of the city of Šibenik is one of the distinguished symbols of our city. In the last century it is painted in orange with characterized black embroidered decorations. This is the hat of the commoner situated on the Šibenik cathedra, higher portrait garland, carved out in the XV century.

Preserving tradition we have pulled an old word from oblivion. We named our apartment BOVULI after an old word that describes black circular curved embroidered decorations on today’s Šibenik hat, hoping that this particular word will not go into oblivion.

Zablaće is a settlement near Šibenik, located in the heart of Dalmatia. The historical documents of 1432 describe it as a place where the residents of Šibenik used the salt-pans. The settlement has been burned down twice by the Turks, in 1519 and 1537. Because of that the salt-pans completely stopped working in 1646. The names of former salt-pans are still known: Veliko jezero -the Great lake, Mala Solina or Blato –Mud (efficient in curing rheumatism, according to expert medical analysis), Mala Solana ili Jezero – the Lake, connected to the sea with a cannal.

Beautiful beaches stretch along the entire settlement, with a nude beach situated nearby. There is a shop, post, restaurants, caffees and taverns („konoba“) suitable for all ages, plus two children playgrounds.

Your information was successfully submitted.